Are you sure you want to delete your account?

You have indicated you do not agree to our terms of use, do you wish to delete your account?

You will also be registered for the agent to contact you via other means you provide, with information relevant to your property search.

Hugo Cox, Financial Times
Many high-profile new homes have yet to find buyers
The forecast slump in foreign student numbers at UK universities is likely to be causing estate agents sleepless nights. Foreign student rental accommodation has become a lucrative sideline, especially in London, and in many cases wealthy parents are ready to stump up the cash for a purchase. But research from London Economics warns of a potential 60 per cent drop in European students attending UK universities after the UK leaves the EU, at a cost to the economy of £2 bn per year. European academics too may end up shunning UK institutions, denting the quality of teaching and research. You might think that Southwark would be more exposed than most areas in the capital. The borough on the south bank of the Thames has become a hotspot for student living, thanks to its easy access to some of the city’s most prestigious universities, including LSE, King’s College London, Goldsmiths and Guy’s and St Thomas’ teaching hospitals. A 2016 report by Southwark council counted 7,198 purpose-built student bedrooms, the fourth largest tally of any of the London boroughs. However, thanks to buyers from Asia, the market is holding up, according to local agents. Nick Pearce of Circa estate agent says that Asian buyers now comprise a little more than half of his customers, with “70 to 80 per cent” buying for a child studying, or about to start, at one of the local universities. Parents favour the added security of buildings with concierges, he says. “Education is an enormous factor for local buyers from abroad. It’s one of the few things that — despite Brexit — we are still leading the world in,” he says. Local agents might be banking on education remaining a draw, since other aspects of the market are looking decidedly shaky. “People are saying that sales volumes are 25 per cent down from the peak; I think it’s significantly more,” says Pearce. According to data from LonRes, the number of transactions in Southwark in the first six months of this year was 36 per cent down on the same period in 2014. Thanks to a strong development pipeline — which will suit Asian buyers, who tend to prefer new-build — a much larger share of them are new homes: 254 sold in the first seven months of this year, compared to 135 in all of 2014. Some of the most high-profile new homes in the area are yet to find buyers, however. At One Blackfriars — a towering top- end development on the Southbank where Circa London is selling a one-bedroom flat for £1.05m — Pearce reports just 61 completed sales out of a total of 274 homes. The building’s major penthouse, built over several floors, has yet to be put on sale, says Pearce. “The planned price is rumoured to be £50m.” 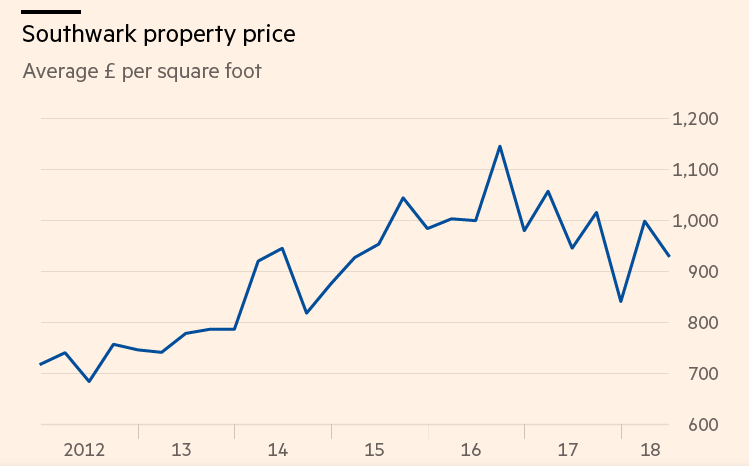 At the Shard, the UK’s tallest building, none of the homes have managed to find buyers yet. According to data from LonRes, the average price per foot of a property in Southwark has dropped 3.4 per cent in a year and discounts are common — this year’s average sale price is 9 per cent lower than the average asking price. 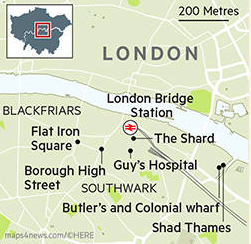 While Asian parents may be pleased with any discounts available, their offspring will enjoy the area’s mix of culture and hip hang-outs. The Tate Modern, The Globe theatre and the Bridge Theatre — London’s newest major theatre founded by ex-National Theatre chief Nicholas Hytner — are all in the area. The National Theatre itself and the Royal Festival Hall are nearby in Waterloo. Flat Iron Square is a popular local nightspot, comprising street food stalls and restaurants, cocktail bars, as well as a nightclub and live music venue — Omeara — owned by Ben Lovett of the band Mumford & Sons. While the best penthouses with river views can fetch up to £1,500 per square foot, the majority of homes go for between £1,100 and £1,200 per sq ft — “not much more than Fulham”, says Ashley Wilsdon of buying agents Middleton Advisors, who moved to the area himself from Parsons Green in 2015. Slightly cheaper waterfront homes can be found around Shad Thames, a street that also gives its name to the area between Tower Bridge and St Saviours Wharf, bounded by Tooley Street to the south. Cluttons is selling a three-bedroom apartment in Butler’s and Colonial Wharf for £1.75m. Away from the Thames, Prime London is selling a four-bedroom converted warehouse in Maidstone Buildings Mews, off Borough High Street, for £2m, which would make for quite a shared student house. At that price, it is not going to be your average student digs.